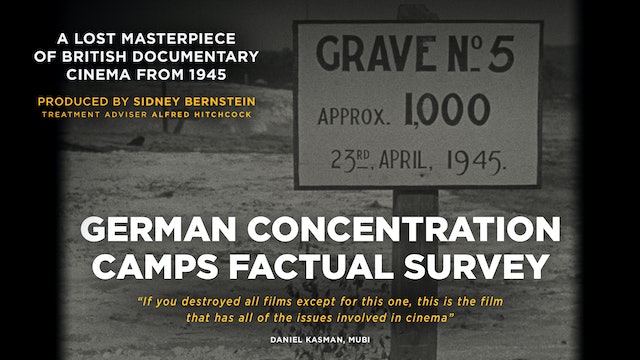 In April 1945, British producer Sidney Bernstein (and his friend/advisor Alfred Hitchock) began preparing a documentary from footage shot by cameramen accompanying troops as they liberated occupied Europe from the Nazis, revealing the atrocities committed at camps such as Bergen-Belsen with devastating clarity. Left unfinished for nearly 70 years due to a shift in government priorities after the war, recently a team (led by Bernstein's daughter, Jane Wells) restored and completed the film for its theatrical premiere in 2017. Critics including the New York Times' Manohla Dargis hail it as "An extraordinary act of cinematic reclamation. You may at times need to close your eyes; mostly, though, you need to watch."

WARNING: This film contains graphic and disturbing imagery. Viewing by anyone under the age of 18 is prohibited.